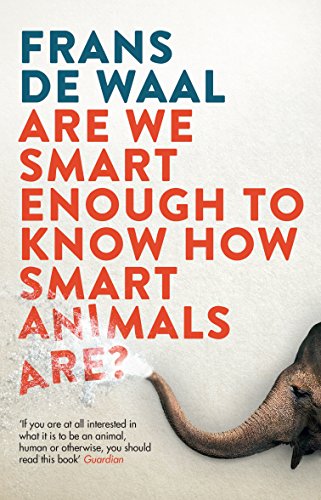 Hailed as a classic, Are We Smart Enough to Know How Smart Animals Are? explores the oddities and complexities of animal cognition – in crows, dolphins, parrots, sheep, wasps, bats, chimpanzees, and bonobos – to reveal how smart animals really are, and how we’ve underestimated their abilities for too long.

Did you know that octopuses use coconut shells as tools, that elephants classify humans by gender and language, and that there is a young male chimpanzee at Kyoto University whose flash memory puts that of humans to shame?

Fascinating, entertaining, and deeply informed, de Waal’s landmark work will convince you to rethink everything you thought you knew about animal – and human – intelligence.

Empathy, cooperation, fairness and reciprocity – caring about the well-being of others seems like a very human trait. But Frans de Waal shares some surprising videos of behavioral tests, on primates and other mammals, that show how many of these moral traits all of us share.

Are We Smart Enough to Know How Smart Animals Are? Quotes

“Chimpanzees, like all the apes, think before they act. The most deliberate ape is perhaps the orangutan, but chimps and bonobos, despite their emotional excitability, also judge a situation before tackling it, weighing the effect of their actions. They often find solutions in their heads rather than having to try things out. Sometimes we see a combination of both, as when they start acting on a plan before it is completely formed, which is of course not unusual in our species either.”