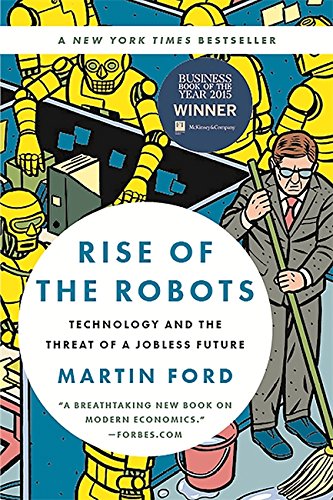 If a ‘robot’ could do your job quicker than you and better than you for no pay, would you still be employed?

Today it’s travel agents, data-analyst and paralegals whose jobs are under threat. Soon it will be doctors, taxi-drivers and, ironically, even computer programmers. Without a radical reassessment of our economic and political structures, we risk the implosion of the capitalist economy itself.

In a frightening tour of artificial intelligence’s rapid advances, technology expert Martin Ford draws on a wealth of economic data from both the US and the UK to outline the terrifying societal implications of the robots’ rise. From health and education to finance and technology, his warning is stark: any job that is on some level routine is likely to be automated and if we are to see a future of prosperity rather than catastrophe we must act now.

Rise of the Robots Quotes

“Technology, of course, will not shape the future in isolation. Rather, it will intertwine with other major societal and environmental challenges such as an aging population, climate change, and resource depletion. It’s often predicted that a shortage of workers will eventually develop as the baby boom generation exits the workforce, effectively counterbalancing – or perhaps even overwhelming – any impact from automation. Rapid innovation is typically framed purely as a countervailing force with the potential to minimize, or even reverse, the stress we put on the environment. However, as we’ll see, many of these assumptions rest on uncertain foundations: the story is sure to be far more complicated.”

“Imagine the uproar when Uber’s cars start arriving without drivers.”

“I find it somewhat ironic that many conservatives in the United States are adamant about securing the border against immigrants who will likely take jobs that few Americans want, while at the same time expressing little concern that the virtual border is left completely open to higher-skill workers who take jobs that Americans definitely do want.”