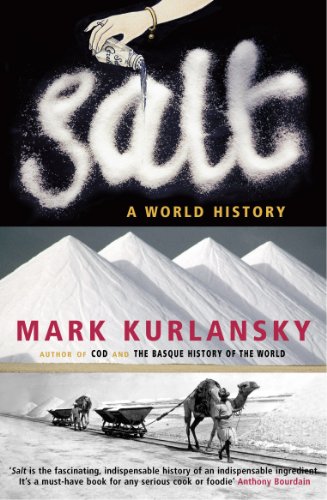 Mark Kurlansky, the bestselling author of Cod and The Basque History of the World, here turns his attention to a common household item with a long and intriguing history: salt.

The only rock we eat, salt has shaped civilization from the very beginning, and its story is a glittering, often surprising part of the history of humankind. A substance so valuable it served as currency, salt has influenced the establishment of trade routes and cities, provoked and financed wars, secured empires, and inspired revolutions.

Populated by colorful characters and filled with an unending series of fascinating details, Kurlansky’s kaleidoscopic history is a supremely entertaining, multi-layered masterpiece.

“Salt is so common, so easy to obtain, and so inexpensive that we have forgotten that from the beginning of civilization until about 100 years ago, salt was one of the most sought-after commodities in human history.”

“Loyalty and friendship are sealed with salt because its essence does not change. Even dissolved into liquid, salt can be evaporated back into square crystals. In both Islam and Judaism, salt seals a bargain because it is immutable. Indian troops pledged their loyalty to the British with salt. Ancient Egyptians, Greeks, and Romans included salt in sacrifices and offerings, and they invoked gods with salt and water, which is thought to be the origin of Christian holy water.”