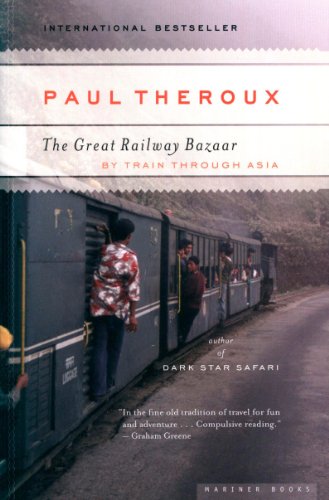 The Orient Express; The Khyber Pass Local; the Delhi Mail from Jaipur; the Golden Arrow of Kuala; the Trans-Siberian Express; these are just some of the trains steaming through Paul Theroux’s epic rail journey from London across Europe through India and Asia. This was a trip of discovery made in the mid-seventies, a time before the West had embraced the places, peoples, food, faiths and cultures of the East. For us now, as much as for Theroux then, to visit the lands of The Great Railway Bazaar is an encounter with all that is truly foreign and exotic - and with what we have since lost.

“The travel book was a bore. A bore wrote it and bores read it. It annoyed me that a traveller hid his or her moments or desperation or fear or lust. Or the time he or she screamed at the taxi driver, or mocked the folk dancers. And what did they eat, what books did they read to kill time, and what were the toilets like? I had done enough traveling to know that half of travel was delay or nuisance – buses breaking down, hotel clerks being rude, market peddlers being rapacious. The truth of travel was interesting and off-key, and few people ever wrote about it.”