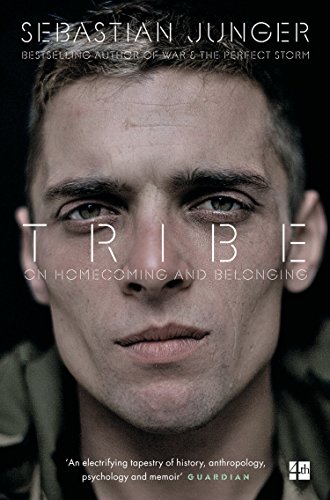 From the author of The Perfect Storm and War comes a book about why men miss war, why Londoners missed the Blitz, and what we can all learn from American Indian captives who refused to go home.

Tribe is a look at post-traumatic stress disorder and the challenges veterans face returning to society. Using his background in anthropology, Sebastian Junger argues that the problem lies not with vets or with the trauma they’ve suffered, but with the society to which they are trying to return.

One of the most puzzling things about veterans who experience PTSD is that the majority never even saw combat – and yet they feel deeply alienated and out of place back home. The reason may lie in our natural inclination, as a species, to live in groups of thirty to fifty people who are entirely reliant on one another for safety, comfort and a sense of meaning: in short, the life of a soldier.

It is one of the ironies of the modern age that as affluence rises in a society, so do rates of suicide, depression and of course PTSD. In a wealthy society people don’t need to cooperate with one another, so they often lead much lonelier lives that lead to psychological distress. There is a way for modern society to reverse this trend, however, and studying how veterans react to coming home may provide a clue to how to do it. But it won’t be easy.

Sebastian Junger: Our Lonely Society Makes it Hard to Come Home From War

Sebastian Junger has seen war up close, and he knows the impact that battlefield trauma has on soldiers. But he suggests there’s another major cause of pain for veterans when they come home: the experience of leaving the tribal closeness of the military and returning to an alienating and bitterly divided modern society.

“Robert Frost famously wrote that home is the place where, when you have to go there, they have to take you in. The word “tribe” is far harder to define, but a start might be the people you feel compelled to share the last of your food with. For reasons I’ll never know, the man in Gillette decided to treat me like a member of his tribe.

This book is about why that sentiment is such a rare and precious thing in modern society, and how the lack of it has affected us all. It’s about what we can learn from tribal societies about loyalty and belonging and the eternal human quest for meaning. It’s about why – for many people – war feels better than peace and hardship can turn out to be a great blessing and disasters are sometimes remembered more fondly than weddings or tropical vacations. Humans don’t mind hardship, in fact they thrive on it; what they mind is not feeling necessary. Modern society has perfected the art of making people not feel necessary.”